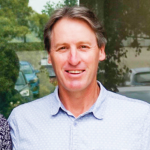 Mark became the Burwood East Campus Pastor at Crossway in January 2020. He has served in a variety of settings, including Heathmont Baptist (Youth Pastor), Newhope Baptist (Associate Pastor), Clovercrest Baptist (Senior Pastor) and Baptist World Aid. He also serves the Essendon Football Club as their Chaplain in a volunteer capacity after serving the Adelaide Crows in the same role for five seasons.

Mark has a passion for the local church and loves to empower and release people in their giftings.

Being attentive to his family is a huge priority and he loves spending time with them. He is married to Tania and together they are raising four teenagers.

EAL – English as Another Language